Brickipedia
Register
Don't have an account?
Sign In
Advertisement
in: Class 3 articles, Sets listed for ages 7-12, 2007 sets,
and 2 more

Harry Potter and the Order of the Phoenix

The third version of the Hogwarts Castle is made up of three buildings or sections, the Greenhouse, the Room of Requirement, and the Main Castle with various rooms.

The Greenhouse is modeled with grey bricks and transparent sections that represent windows. The Greenhouse is made up of two sections to fold up into the rectangular struture. Inside there is a various array of green plants, mushrooms, and several Mandrakes in barrels. Among the plants is a blackboard and a magnifying glass.

This room also folds together to make one building and is mostly empty except for some Hogwarts banners on the walls on the ground floor and some furnishing in the side towers. As well as a practice target for the D.A., this room features a wand-holder. The roof has a rat, and inside the tower segment of the wall section are two alcoves with Owls (possibly representing the Owlery).

The Main Castle of Hogwarts splits into three-hinged parts. The bottom level of the middle section is the Entrance Hall. Above it is the trophy room with trophies, ribbons, gems, and golden objects. In the top floor is a version of the astronomy tower with a telescope and an angled tile with a map of the constellations. One tower has the Gryffindor Common Room, on the bottom floor is a fireplace with Sirius Black's head in it and the floor above this is a dormitory bed. The first floor of the second tower is Professor Snape's office with tables full of potions where Harry learns Occlumency and above this is Professor Umbridge's office full of pink flowers, perfume, and plates with kittens on a wall that swings open to show Harry's Firebolt broom that Umbrdige confiscated. Umbridge's office also has a scroll piece that many believe to represent one of the many Proclamations Umbridge had hung up during her reign at Hogwarts.

The minifigures included are Harry Potter, Ron Weasley, Hermione Granger, Draco Malfoy, Professor Dumbledore, Rubeus Hagrid, Professor Snape, Professor Umbridge, and a Death Eater. The versions of Draco, Snape, Hermione, and the Death Eater are also exclusive to this set (though other versions of that same minifigure appear elsewhere) while Umbridge does not appear anywhere else whatsoever. Another interesting and exclusive feature is the two minifigure heads included in the set (without any bodies) representing mandrakes. Additionally, this set included two black coloured Thestrals, and the piece used for most of the Thestral's body was also used for a black skeleton horse in the various Castle sets.

The exterior of the castle

The entrance of the castle

Care of Magical Creatures and Herbology

The interior of the castle 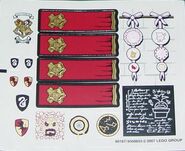 The stickers for the set

Minifigures in this set

Outside view of the castle 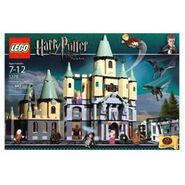 £69.99 +
Released
May 2007 +
ShopDescription
Aligning with the release of the 5th movie … Aligning with the release of the 5th movie - Harry Potter and the Order of the Phoenix - July 2007 - the LEGO Company introduces Item 5378 Hogwarts™ Castle, one of the most iconic and requested sets in the Harry Potter universe. Harry and his friends are back for their fifth year at Hogwart's, and they have a new Defense Against the Dark Arts professor, the nasty Dolores Umbridge. Find the hidden book, document and envelope, reclaim the confiscated items from Umbridge's office, and re-enact the story and more with the Room of Requirements. Offers key scenes and tonality from new film. 9 mini figures, including NEW Dolores Umbridge. Green House with Mandrakes and characters straight from the movie!es and characters straight from the movie! +
Theme
Harry Potter +
Title
Hogwarts Castle +
Txt1
Harry Potter +
Txt2
Hermione Granger +
Txt3
Professor Dumbledore +
Txt4
Hagrid +
Txt5
Dolores Umbridge +
Txt6
Professor Snape +
Txt7
Draco Malfoy +
Txt8
Ron Weasley +
Txt9
Death Eater +
Type
Set +
USPrice
$89.99 +
Advertisement