55000 LEGO Universe, also called LEGO Universe: A Massively Multiplayer Online Game, was a LEGO video game that was released in a Massive Multiplayer Online Game (MMOG) format and developed by Netdevil. It was initially scheduled to be released in 2009, but the LEGO Group pushed its publication date to October 26, 2010, due to a redesign forced by the lack of popularity of the game by internal testers. It featured customizable LEGO Minifigures as the controllable characters and LEGO environments as the surroundings. Players were able to build their own objects or vehicles, and display them in the game.

The LEGO Universe story begins when four explorers - Duke Exeter, Doc Overbuild, Hael Storm, and Baron Typhonus - set out to find a source of rare power. They find the Imagination Beam, the long lost essence of pure imagination that could create anything imagined, on a cube-shaped planet called Crux. Hael imagined a pirate ship, Duke imagined a large kingdom, and Dr. Overbuild imagined a robot dog, but the Baron had become chaotic during the long travel and imagined a creature of pure evil.

The game allowed players to create their own Minifigures and control them with the mouse, touchpad, and/or keyboard. These minifigures could build creations in three ways: Quick Building, where a minifigure can quickly build a pre-determined model; Modular Building, where a minifigure can build a model by using different pre-built pieces of it (the pieces have different variations, which allows for many different combinations); and Free Building, where minifigures can use thousands of bricks to create whatever they like. However, Free Building is only allowed on designated properties. The worlds in the game are always evolving, through both monthly patches (updates) and the players' creations.

One of the biggest missions for the LEGO Group in this game was to create a safe environment for children, due to LEGO having a large target audience of children. The game allowed players to create, build, quest and socialize together in a safe environment. Using state-of-the-art technologies, chat filters strain out certain profane words and only let words in the game's dictionary through.

There has also been a promotion on the website in the form of LEGO Pods landing on Earth at LEGO Retail Stores. The Bradford Rant Institute of Cosmis Kinesis' (B.R.I.C.K.) website is dedicated to the LEGO pods, which contain information about the minifigures from LEGO Universe. The website contains several screenshots from the game and a "message" from the minifigures in LEGO Universe. All 7 pods have landed and they contain letters of a message from the minifigures, which has been "deciphered" to mean: "Answer the call to save imagination." This has evolved into 20 minigames on the LEGO Universe LEGO.com site called "The Great Minifig Mission.", which revealed story items about the game.

The game was officially launched on October 26, 2010 with early access available for those who pre-ordered the game on October 12th, 2010. However, this date was changed to 8th a week before it was ready for founders launch. The pre-order item number 2855133 was changed to 55000.

It was announced on November 4th, 2011 that it would be shut down on January 31st, 2012 due to an unsatisfactory revenue model in their target group. This date was later changed to January 30, 2012.

Factions are large groups of minifigures, each of which protect the last shard of imagination and push back the Maelstrom in their own ways. They are Assembly, Venture League, Sentinels, and Paradox.

Assembly - Guided by construction specialist Doc Overbuild, they battle the maelstrom using various creations. The Assembly Faction is the first of the 4 Nexus Force alliances. Their members believe that the act of creation naturally sets back the chaotic destructive nature of the Maelstrom. They are challenged to push the limits of imagination, exploring new styles and new ways of construction. They consider themselves to be the foundation of the Nexus Force. Even though they may not be as brave as the Sentinels or as daring as the Venture League, they are brilliant architects and clever engineers who are highly respected for their skills.

Their leader, the eccentric genius Doctor Overbuild, is very intelligent and similar to Albert Einstein. His passion is building and pushing the uses of imagination. He spends months at a time locked in his building laboratory, creating the visions in his head.

Their leader, the cheerful pirate Hael Storm, has a great sense of humor and is always ready with a wisecrack. He's a born problem solver and in times of danger Storm will always rise to the challenge. His specialty is the sea and he is a seasoned explorer of all the oceans in the Universe.

Venture league is an adventurous group of Daredevils, Buccaneers, and Adventurers and their symbol is a skull in front of a compass.

The Sentinels - Legendary warrior Duke Exeter leads the Sentinels in the fight against the Maelstrom. The Sentinels are the third faction of the Nexus Force and their mission is to protect the weak, defend the good and serve justice to all. Integrity and honor are the core values of their operation and their heroic performance overshadows all evil. Members of the Sentinels are the most powerful Minifigures of the Nexus Force. What they lack in pure imagination, they make up with strength and courageous willpower. They are known and respected as the most honorable warriors in the Universe.

Their leader, the charismatic and brave Duke Exeter, is an inspiration to everyone around him. He refuses to compromise his principles, and always finds a way to achieve victory with honor. Always trusting that the right will win, he's big on giving everyone second chances and is always prepared to take on challenges.

The Sentinels are a group of warriors consisting of Knights, Samurai, and Space Rangers. Their symbol is a bird, possibly a blue eagle.

Paradox - Ninja warrior Vanda Darkflame leads her group in using the Maelstrom's power against itself. Paradox is the fourth faction of the Nexus Force. Paradox members closely study the Maelstrom power in an effort to find the evil within it. They believe that the battlefield is no place for honor and use whatever means are necessary to achieve victory. Paradox has a reputation for being secretive about their operations. They are sneaky in their attacks and highly effective in all their disciplines. Though Paradox has never broken the trust of the other Factions, they are still looked upon suspiciously.

Their leader, the mysterious ninja warrior Vanda Darkflame, believes that defeating the Maelstrom requires understanding it and turning its power against it. She is cynical, decisive, and always fights for what she feels is right, no matter what anyone else may think about her methods.

Paradox is a group of Space Marauders, Shinobi, and Dark Sorcerers and their symbol is a slanted eye with a spiral behind it like the Paradox Galaxy.

The game was released as a DVD, and also as a download from the LEGO Universe Official Website. The cost of the game was based on a subscription model. The packages are US $9.99 for 1 month, $49.99 for 6 months ($8.35 per month), and $89.99 for 12 months ($7.50 per month). The North American release date was October 26, the European release date was October 22 with early access on October 8 for "pioneers", or "Founders", those had who pre-ordered the game. Those who pre-ordered the game also received an exclusive astronaut minifigure and an astronaut costume in-game. Pre-Ordering ended on September 27 for North America and on September 23 for Europe.

During the beta testing and live release of the game, contests were also held with rare and valuable prizes. As well as regular weekly competitions, the Nexus Championships was scheduled to be a lengthy contest in which all LEGO universe members, both free to play and subscription, could participate. 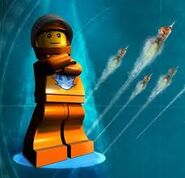 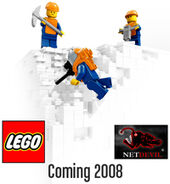 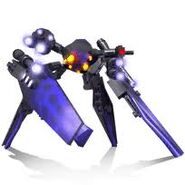