This is an orange, black, and white rocket that is featured in-game. Players normally only obtained this rocket if they had pre-ordered the game, and each set contains a card with a unique code that allowed players to receive the rocket in-game. This rocket is known as the Nexus Rocket. It is a rare sight to see somebody using it in-game, as many people prefer other newer rockets. It must be noted that those who obtained this rocket through pre-ordering also were granted a 2853944 Astronaut minifigure along with an in-game version of the outfit. 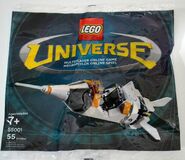 Retrieved from "https://brickipedia.fandom.com/wiki/55001_Universe_Rocket?oldid=1839117"
Community content is available under CC-BY-SA unless otherwise noted.