5617 Alien Jet is a Mars Mission set released in 2008. The set includes a small ship used by the Aliens and one glow-in-the-dark minifigure.

Like the other ETX ships, it consists of a sleek cockpit with two arms at the front. It has most of the functions of the 2008 mini sets series. It can open via the cockpit, make the alien stand up, and both arms can fold in, forming a sneak stance, and placing the cannons on each other. This set was an impulse set. 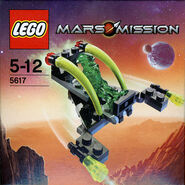