Brickipedia
Register
Don't have an account?
Sign In
Advertisement
in: Class 2 articles, Sets listed for ages 5-12, 2008 sets,
and 4 more
English

5618 Troll Warrior is a Castle set released in 2008. The set contains 19 pieces, building a battle cart, a Troll Warrior and a rat.

The main part of the set is the attack cart. This consists of two wheels joined by a wheel joiner onto a small baseplate, two silver spears, and a flick-fire missile with a maroon tip. The rest of the set consists of a Troll Warrior and a light grey rat. 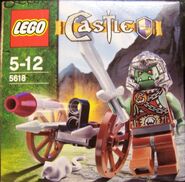 x12px $6.99 +
Released
June 27, 2008 (US) / May 21, 2008 (UK) +
ShopDescription
Look out for the fearsome Troll Warrior!
The troll warrior is out to conquer the LEGO Castle kingdom, and he's got a launching cannon and pet rat to help him! * Includes armored troll warrior minifigure, wagon with flick-fire cannon and a rat! +
Theme
Castle +
Title
Troll Warrior +
Txt1
Troll Warrior +
Type
Set +
USPrice
$3.49 +
Advertisement