LEGO Loco is a LEGO-branded children's computer Video game for the Microsoft Windows platform. It is a simple open-ended construction game with a slight emphasis on Rail Transport. It was introduced in 1998.

The aim of the game is to construct a town in which LEGO people can live in. The game lacks any real challenge (there being no construction costs, no running costs, and no budget in general). The fact of increasing the population could count. That, coupled with its very colorful graphics, help to designate its target audience, which are children aged between 6 and 12. At the beginning of the game, the player has a "Toy Box", in which he/she can select buildings from its lists and place them directly into the space provided. The player can put down roads, railway lines, stations, crossings, buildings and scenery. To start the simulation, the player must close the Toy Box and the town will come to life (though the player can open it again to make some changes, save the town, or open a new one). After a while LEGO minifigures will begin moving into the houses provided (if any), and the player can, like with ordinary figures, pick them up and place them somewhere else. This can affect the figure's mood, depending on where it's placed. Also, using the train house (engine shed), the player can create trains to run on the railway lines. If a train has passenger carriages it will stop at any stations that have been placed near a piece of rail track. The player can also control the train. Furthermore, the player can add on a mail carriage to the train, thus enabling it to carry postcards that have been created by the player. The train or trains can also go through these tunnels that the player can place at the edge of the map, and some tunnels can be used to help send and receive postcards (depending if a network has been set up or not).

LEGO Loco started development as "LEGO Desktop Railway", a desktop toy, but soon grew into a program that ran in its own window, complete with buildings, minifigures, and roads as well as trains. The story of its creation was the subject of Bits N’ Bricks episode 23.

Some developers also shared anecdotes with a fan:

"Pelvis" did make it into the game, but only in the postcard creator. The sprites for the Viking statue mooning the player are in the final game data, but it's unknown if there's way to trigger them.

Activate by closing the toybox. Tricks will only work with regular items, no seasonal or holiday ones.

Animals will only come out of regular items, no seasonal or holiday ones.

Sets that appeared in LEGO Loco 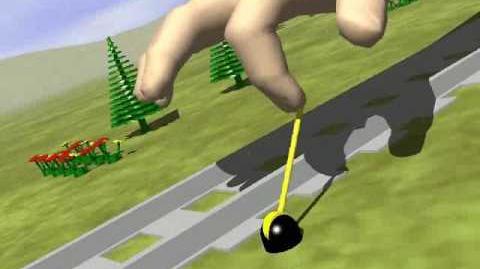 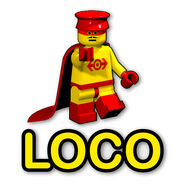 Render of a train engine

Ad for LEGO Stunt Rally, IG's next LEGO game, featuring some LEGO Loco characters
Community content is available under CC-BY-SA unless otherwise noted.
... more about "5701 LEGO Loco"
RDF feed
ArticleRating
4 +
Developers
Intelligent Games +
Genre
Virtual World +
Image
5701-1.jpg +
Item №
5701 +
Modes
Single Player, Multiplayer +
Platforms
Windows PC +
Publishers
LEGO Media +
Rating
E/3+ +
ShopDescription
Originally, we wanted to call Lego Stunt R … Originally, we wanted to call Lego Stunt Rally ‘Lego Moto’ as a sort of echo or follow-on from Lego Loco which proceeded it. Personally, I still think it was a shame to change the name.</br></br>Lego Loco had a feature where you could send little postcards in trains to other people over the internet. A sort lego train email system. It was super-cute. But lego people were worried that it might expose children to swearing so they asked us to put a swearing filter in and sent us a list of swear words to block. It was a short list and so we asked our team to come up with a longer list. In an hour over lunch we added hundreds of words to the list! 😊</br></br>One of the many easter eggs in Lego Loco was that you could get the viking statue to do a moony. We had a visit from a very senior lego person during the development and the programmers demoed this ‘feature’. There was a sharp intake of breath from the producers but the exec roared with laughter and the easter egg stayed in the game.</br></br>A lot of the Lego characters in Lego Loco are modelled on people who worked at Intelligent Games. Their faces are immortalised as minifigs in the game. are immortalised as minifigs in the game. +  and My favourite anecdote was while working on … My favourite anecdote was while working on LEGO Loco, we had added several small animations to objects in the game, event easter eggs etc. One of these was a 'temporary' animation of one of the statues taking a p*&s (to keep the developers amused) One day we got a visit from one of the Christiansen family (thinking about it, it may have been Kjeld)  So, we're all standing there giving a demo, and this statue pulls down it's pants and takes a leak..... you could hear a pin drop....  Then Kjeld starts laughing his arse off. He thought it was great. We took the animation out of course, but that gave me an insight into the Danish sense of humour and what a nice bunch they are. </br></br>Another memory was my first visit to LEGO headquarters in Billund. Walking through the R&D department was a childhood dream. Seeing all the archived LEGO sets from the past, the museum, and most surprisingly, the number of LEGO sets they had designed over the years but never released, like a wonderful Vikings range, Jurassic Park etc.</br></br>I designed a LEGO character called 'Pelvis' an Elvis impersonator. Everyone liked him, but the Presley estate demanded a ludicrous fee in order to use it. I was sad that he never appeared in any of the games.</br></br>We created LEGO voices in Loco, with a made up language, but many people thought it was Danish!  We had to put a sticker on the box in the end to explain it and stop people phoning the office!ain it and stop people phoning the office! +
Theme
Video Games
Trains
9V +
Title
LEGO Loco +
Date"Date" is a type and predefined property provided by Semantic MediaWiki to represent date values.
1998 +
Advertisement