The Game Boy Color version of LEGO Island 2 has many differences from the other three versions, likely due to the fact that it was developed by Crawfish Interactive instead of Silicon Dreams. There are no clearly defined sub-games as the player controls Pepper in the same fashion at all times, though there are segments that alter the gameplay, such as boss battles, sneaking past guards to escape an area, and mazes. The Toy feature has been removed, and there are no vehicles to control. There are also some enemies, such as Brickster-Bots, Pirate Skeletons, and Mummies, that will actively chase Pepper, though they do nothing besides knocking him away and off his skateboard on contact. Pepper can pick up Trading Cards, which are then added to his card inventory. Each card contains a picture of a character in the game, and cards can be traded between players with a link cable between Game Boys. While the game is still quite linear, there are sometimes optional side quests that give Trading Cards when completed. Pepper can also pick up and receive other items from characters, which can be used later on in the game or in sidequests.

The game opens with the Infomaniac giving Pepper his skateboard and leading him to the Pizzeria. Papa Brickolini gives Pepper a pizza and tells him to bring it to the Brickster at the jail. Pepper delivers the pizza, however The Brickster darts out of his cell when Pepper opens it. After a short skateboard chase through the park, Nick Brick gives Pepper a Pizza Chukka, which can fire pizzas. Pepper is told to go to the Information Center to talk to the Infomaniac, but can't, as Bill Ding can't finish the road without a pickaxe and the gates to the only other way to the Information Center, the park roads, are locked. Pepper gets a pickaxe from Nubby Stevens at the gas station and gives it to Bill Ding and is granted access to the road. The Infomaniac explains that the Brickster has stolen the Constructopedia, and that they must recover it before any pages are torn. The Police tell Pepper that the Brickster went to Adventurers Island, and that he can get a boat at the Res-Q Center. On his way to the Res-Q Center, Pepper sees a Brickster-Bot, and then falls down a hole in the ground, a trap the Brickster-Bot had made.

Pepper finds himself inside a cave filled with Pirate Skeletons. After using his Pizza Chukka to defend himself and solving series of puzzles involving switches to open doors, he makes his way to a room where he fights the first boss of the game, a Rock Monster. Pepper defeats it, and escapes the cave as it collapses.

Pepper then goes back to the Res-Q Center and gets in a raft. He then enters the Phanta Sea, and finds Snap Lockitt being chased by a shark and Captain Redbeard on his ship. The player can simply pass them by and continue to Adventurers Island, or talk with them and start a side quest. In the side quest, Captain Redbeard gives Pepper shark food, and Pepper uses it to distract the shark and let the swimming minifigure escape. Bologna Roni on a small island then comes closer to the shore, allowing Pepper to talk with him. He explains that he needs a shovel to dig up the treasure on the island, however, nothing more can be done at this point. Pepper then precedes to dock his boat at Adventurers Island. Nearly everybody on the island tells Pepper to talk to Señor Palomar, though Pepper can also explore, finding some areas which have hidden Trading Cards, but also spawn Mummies, which Pepper can defeat with the Pizza Chukka. Upon finding the tavern and telling Señor Palomar of the Brickster's escape, Palomar runs to the local prison, which is guarded by Imperial Soldiers and Imperial Guards. Pepper follows him, and is arrested. Pepper escapes from his cell after Pippin Read sneaks in and unlocks it. Pepper finds Pippin's diary on a table, which mentions an expedition in which an ancient stone building and crashed helicopter were found in the jungle. Also in the corner of the jail is a shovel. After sneaking past the guards, Pepper escapes the prison, where Pippin gives him the key to the jungle gate. Here, Pepper can either go directly to the jungle through the gate, or backtrack to give the shovel to the man on the island in the Phanta Sea. If Pepper gives the shovel to man, the man will dig up the treasure and give it to Pepper; a Trading Card. However, upon returning to Adventurers Island, Pepper will be re-captured and will have to escape the prison a second time before going through the jungle gates.

Pepper enters the jungle, and is immediately attacked by insects and darts. Pepper sees the Brickster run into the jungle ruins, and goes after him. He comes out the other side of the ruins, and notices the crashed helicopter to the side of the path. Achu then walks up to Pepper, who sends him to Castle Island.

Pepper finds himself in front of King Leo's Castle. A knight tells him that the Brickster's cohort, Cedric The Bull, has escaped. Pepper sneaks past the castle guards and makes it to the throne room. King Leo sends Pepper to find his daughter Princess Storm, who became lost in the maze, while he secured the castle. After bring Storm to the courtyard, Pepper finds out that Cedric's army has surrounded the castle, but Weezil has been captured. King Leo sends Pepper into the dungeon to Weezil's cell. Weezil thinks Cedric sent Pepper, and tells him Cedric plans to attack that very night. King Leo rewards Pepper for getting this information by granting him access to the treasure room, which contains a large amount of treasure chests holding Trading Cards. King Leo releases Weezil, to lead Pepper to the forest where Cedric is camped. After getting past the guards with the help of Majisto and receiving a Super Pizza Chukka from a Forestman, Pepper reaches Cedric's hideout and battles with him. Cedric is defeated, but the Brickster, who had also been at the hideout, escapes in a space ship. However, a piece falls off of the Brickster's ship, the "Smart Brick". Majisto then teleports Pepper and the brick to the LEGO Island Space Port. After destroying Brickster-Bots with the new Pizza Chukka, Bill Ding adds the Smart Brick to the Space Shuttle, and Pepper blasts off for OGEL Island in pursuit of the Brickster. After solving a maze and defeating more Brickster-Bots, Pepper reaches the Brickster. A two-part battle follows, which ends with the Brickster being caught in a jail cell. Pepper flies the shuttle back to LEGO Island, the Brickster is locked back up.

For a history of the development of LEGO Island 2 before the Gameboy Color port entered development go here.

The idea for a Game Boy Color port of LEGO Island 2 goes back to after Dave Upchurch, producer on Krisalis' version of the game, left LEGO Media in August 1999[1] when only Playstation and PC versions were planned.[2]

Most of the known development information comes from documents made for the game, which mention considerable information about cut content.[3][4] A variation of LEGO Island's storyline is at the start of the design document, with the Brickster escaping to OGEL Island after he broke out of jail and putting the Power Brick into the Debricker, described as a "monster" multiple times in the document.[5]

An area completely based around the Rock Raiders theme was planned for the game, but cut for time. It would have first come up after the jungle section after the Pepper made his way through a tomb. After Pepper had a boss fight with monsters, Rock Raiders would then have arrived in GDVs (Giant Drilling Vehicles) to take him to the Rock Raiders HQ. Afterwards, he'd of been taken to a Rock Monster's nest that the Brickster would have been raiding. After Pepper dealt with multiple Rock Monsters the Brickster antagonized he would have had the choice of taking caves to Adventurers Island, Castle Island, or LEGO Island.[6]

Multiple mechanics were cut from the final game including health, currency, shopping, and allowing to chose a custom name other than Pepper for the main character.[8] The boating feature of the Phanta Sea section was also supposed to be much larger, with the player being able to boat between Adventurers Island, Castle Island, and LEGO Island.

An early version of LEGO Island's map in the game

A mockup of the pirate cave section

A layout mockup for the cut Hotep's tomb section

An early map for the jungle section of the game

A mockup of a cut jungle cave section

A development map containing the Lion's throne room and dungeon.

A development map of the layout for the Dark Forest section 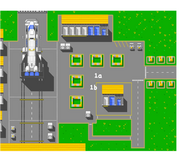 An early map for the Spaceport