5731 LEGO Island is a 1997 Windows PC game developed and published by Mindscape. It was one of the first LEGO video games ever created. It was re-released in 2002 and 2007.

LEGO Island is made up over 35 characters.

Pepper Roni: The "star" of LEGO Island. He is a pizza delivery boy who delivers pizza to the citizens of LEGO Island. His mother is occasionally seen on the Island (The woman in the red). Pepper was adopted by Mama and Papa Brickolini. He is great at skateboarding and math, but cannot read or spell very well. His home is at the Brickolini's Pizzeria.

Nick Brick: The detective of the police force. He has a great memory and loves doughnuts, but he cannot smell. He uses his motorcycle to patrol the island, and is occasionally seen at the race track handing out fining tickets to the four bikers. Laura Brick is his sister, whom along with him lives at the Police Station.

Laura Brick: Police officer and Nick Brick's sister. Laura Brick is a skilled motorcyclist and loves patrolling LEGO Island. Laura is known to teach Pepper how to read and spell. She isn't nearly as strict as her brother, but quotes, "Don't get me wrong. I can get tough when I have to." Laura can't count or do math very well, and lives at the Police Station just like her brother.

Papa Brickolini: The chef of LEGO Island's Pizzeria, Brickolini's. He met his wife, Mama Brickolini, on a cruise to LEGO Island. Afterwards they got married and opened the Pizzeria, and he and Mama adopted Pepper Roni as their son later on. Pepper became the pizza delivery boy and Papa sent him on deliveries. Papa is very good at dancing, but not at singing. Papa is known to care for Pepper greatly, yet he is shown to be a little strict. He lives at the Brickolini's Pizzeria.

Mama Brickolini: Mama got on a cruise with only the clothes on her back and her piano, where she met her future husband, Papa Brickolini. When they arrived on LEGO Island they got married and opened LEGO Island's Pizzeria. The couple later adopted Pepper Roni as their son. She is an accomplished pianist and has excellent hearing, though she is nearsighted. She lives at the Brickolini's Pizzeria.

Infomaniac: The creator of LEGO Island; he is cheerful and optimistic but forgetful. He built the Brickster almost 40 zillion years ago. When he told the Brickster he was going to make a new minifigure the Brickster went ballistic and stole some bricks and went away to make his own island. The Infomaniac is the player's helper throughout the game and gives advice whenever needed. He lives in the Information Center.

The Brickster: He is the main antagonist in LEGO Island, and its sequels. He was created by the Infomaniac many years ago. They were best friends until The Brickster became jealous of a new minifigure the Infomaniac built. He began stealing bricks from around the island, and with them created his own island, "OGEL" ( Which is LEGO spelled backwards). Sometime between the events of the Brickster's departure from LEGO Island and the start of the game, the Brickster was imprisoned in the LEGO Island jail.

(See The Brickster's Story below in the Play section)

He somehow managed to make a call to the local pizzeria (posing as Nick Brick) to order one of Papa Brickolini's ultra hot and spicy pizzas which he then used to melt the door of his cell and escape, promptly stealing the helicopter and the power brick. The Brickster then went to his hideout and then stole the hospital ambulance, disassembled the helicopter, and set out to disperse the pieces throughout the Island, and take everything else (with the aforementioned power brick to deconstuct buildings). Pepper is then sent out to retrieve the parts for the helicopter. Once the helicopter was repaired, Pepper then assisted in the Brickster's capture by diverting his attention away from the police by throwing Pizzas at him (which he couldn't resist eating), and also giving the Police donuts to speed up their pursuit of the Brickster. Once the police had captured him he was re-imprisoned in the LEGO Island jail.

Bill Ding: Bill Ding helps the player when building the race car at the race track, the buggy at the Octan Garage, the jet ski at the Lifeguard's Post and the helicopter at the Police Station. He is also assigned to helping Pepper in rebuilding the police helicopter, not before acquiring all of its parts after they were scattered across the island by the Brickster, this being towards the end of The Brickster's Story.

When first starting a player will find himself in the Information Center which acts as a main menu/hub for the game, however the player can choose to start elsewhere on the island, by dragging the character's icon onto an icon on the map of the island, which indicates a location on the island. When on the island the player is free to wonder the entire island and interact with other minifigures. Also, Bill Ding can assist the player in building a helicopter, race car, jet ski, and a dune buggy (see below). You can drive the aforementioned vehicles, along with Pepper's skateboard, a bicycle and a police motorbike. The race car can only be driven in the racing minigame, the jet ski can only be used to surf in the surrounding waters of the Island and the helicopter can hover through the sky but can only land at the jail, however.

In the Information center you can view a demo of each of the characters that you can play as. You can select from the characters, which each have different abilities which are as follows.

Each character also has its own pizza delivery to deliver to a specific destination on the island, this comes about once the player walks to the pizzeria and clicks on it. There will be several obstacles that will form between the pizzeria and the destination of delivery, some to block off roads such as a parrot with roadblock trees or a cleaner clearing a road-grown palm's leaves. As Pepper Roni, the destination is to the jail. But while all of the other pizza deliveries lead to nothing more, this delivery to the jail is the beginning of a mission for Pepper to save LEGO Island and re-capture the Brickster after he escapes from the jail and begins to terrorise the island. This can only be done if the police helicopter is built. Prior to that, if Pepper completes his pizza delivery to the Brickster, it will be registered as a successful run even though the Brickster discards the pizza. He then hints to Pepper to create the helicopter and re-deliver another pizza to him, leading to the aforementioned mission (see The Brickster's Story below).

Other mini-missions within the game for all of the playable characters to participate in the same way, including a formula one race at the Race track, a Jet Ski course at the Lifeguard's Post (These two using vehicles you built), taking the hospital ambulance to minifigures in need (with the assistance of Enter and Return), and assisting Nubby Stevens (the head of the Gas Station) by taking the tow truck to the Race track in assisting a car breakdown.

For all of the characters, there is the opportunity to deliver a pizza to a specific destination, such as the Police Station for Mama, the race track for Papa, the Hospital for Laura and the Octan Garage for Nick. All of these missions merely consist of delivering the pizza, save for one.

When playing as Pepper and with the police helicopter built, choosing to do a pizza delivery will have him told to deliver a pizza to the jail, as Papa receives a telephone call from the jail (him assuming the caller is Nick Brick). After traveling to the jail the Brickster takes the pizza from Pepper's hand, and holds it up against the jail lock which melts the lock and gives the Brickster the chance to escape.

As the Brickster gets out, he runs for the police helicopter, gets in, fires it up, and flies away. He flies up to the top of the Information Centre, stealing the power brick from the top, before flying all the way over to the other side of the island to his hideout in the cave. Meanwhile, Laura and Nick, followed by the Infomaniac, Mama and Papa come to the jail to find out what is going on. The six of them try to think up a plan of action, resulting in Pepper having to go over to the other side of the island to track down the Brickster. As he travels across the island, Pepper encounters several citizens of the island, all of them in a panic. Pepper finally reaches the other end of the island, followed by Nick and Laura on their police motorbikes, only to encounter the Brickster, driving away in the ambulance. (Which he also stole from the hospital)

With Nick and Laura on the ground, on their motorbikes, and Pepper in the air, with the police helicopter now equipped with a turbo donut and pizza chucker, the island finally looks fit to be saved. The Brickster, also on the ground, is now on another motorbike, but still using the power brick to suck the bricks from the rest of the buildings on the island. Pizzas thrown onto the roads by the pizza chucker can draw the Brickster in one way, donuts thrown onto the roads by the donut chucker can draw both police officers in one way. The game is won when one of either Nick or Laura runs into the Brickster's motorbike. As this happens, the Brickster is nabbed by both of them, and dragged back to the jail. Meanwhile, the power brick returns to the top of the Information centre, and the rest of the citizens of LEGO Island chant Pepper's name.

There is an alternate ending to this story too. If the Brickster manages to reach the Pizzeria, and suck the bricks out of it, the island is deemed lost. A cutscene shows a bleak sky, the island's buildings and vehicles in ruins, Pepper desperately speeding away on his skateboard and the sound of people in sorrow. The screen then points towards an array of wreckage revolving around the Brickster, with him then cheering, "It's mine, all mine!" However, time will reset and everything returns to normal afterwards, with the Infomaniac saying "At least it's not bad as it looks!"

These are scans of the manual that came with LEGO Island. 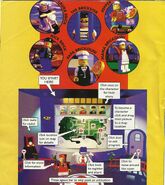 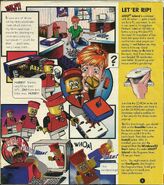 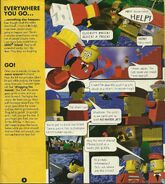 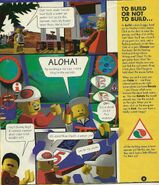 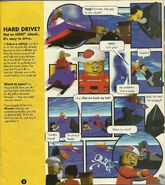 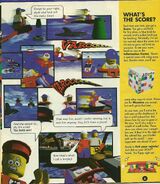 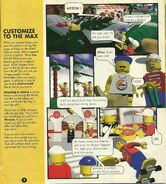 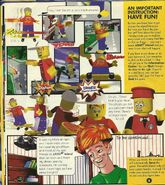 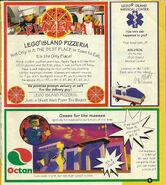 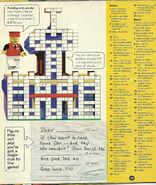 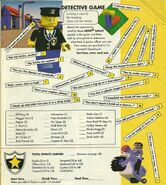 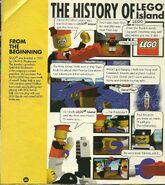 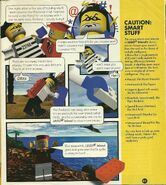 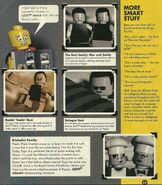 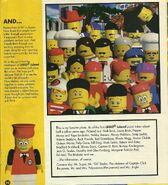 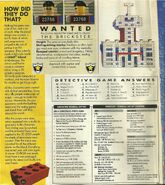 Retrieved from "https://brickipedia.fandom.com/wiki/5731_LEGO_Island?oldid=1921420"
Community content is available under CC-BY-SA unless otherwise noted.