LEGO Island 2: The Brickster's Revenge is an action adventure video game released in 2001. It is a sequel to LEGO Island, and was followed by Island Xtreme Stunts. The main character of the game is a young pizza delivery boy named Pepper Roni. It was re-released in 2007.

Similar to the first game in the series, LEGO Island, the gameplay in the PC and PlayStation versions of the game are directed by missions and sub-games. Unlike the previous game, the objectives must now be completed in a linear fashion. One difference from the previous game is that the player can now only play as the main character, Pepper Roni, unlike the previous game where multiple characters were available to choose from. Other notable changes include the switch to a third person camera and the addition of the ability to jump. Pepper can still use any vehicle he sees, and the Toy feature from the first game is also present, allowing Pepper to change the colours of vehicles, change plants and some landscape elements, and alter the hair/headgear of other minifigures.

After the events of the previous game and the Brickster's recapture, Pepper Roni is promised a new house, on condition that he delivers pizzas around the island. Having delivered enough pizzas to earn his new house, Pepper is told to deliver one last pizza to the jail in which the Brickster lurks. The Brickster then adds additional chilies to the already spicy pizza, letting him use is "patented Brickster dragon breath" to melt the lock of the jail cell. He then escapes by stealing a police helicopter and flying to the Information Center, where he steals the Constructopedia, the book containing the blueprints for all buildings on the island. He then tears pages out of the book, causing all of the buildings on LEGO Island to deconstruct, fly up into the sky and disappear. Having summoned the Brickster-Bots, the Brickster departs for his asteroid island, Ogel Island.

The Infomaniac informs Pepper that he must destroy the Brickster-Bots and track down the missing pages of the Constructopedia. He soon begins to locate a few of the pages. With each page returned, a building is reconstructed and put back in place.

Pepper then ventures to Castle Island, where it's been reported that the Brickster has destroyed the bridge there. While diving to connect its two halves to rebuild it, he finds the bricks and a page. He then finds out that another page is up on the Bull's castle flag pole as the Lions stole the Bulls' real flag. The Bulls promise to give Pepper the flag, as long as he returns the stolen flag. The Lions agree to give Pepper the flag, as long as he defeated the Bull's Dark Knight in a joust. After defeating the Dark Knight, Pepper receives the Bull's flag from the Lions to give it to the Bulls. However, before the Bulls can give the missing page to Pepper, he has to engage in a cannon battle with Cedric the Bull, an ally of the Brickster, as he steals the page, just as the other Bulls are about to give the page to Pepper. After defeating Cedric the Bull, Pepper acquires the page, signalling his time to leave Castle Island.

Pepper then comes back to LEGO Island, collects more pages, and leaves again to fly through a portal to Adventurers Island with a helicopter. Upon landing, he meets Johnny Thunder and Pippin Reed, who agree to help him track down the pages on the island as long as he helps them. After defending the Adventurer's truck from snakes as they drive through the desert, they find Dr. Kilroy at some nearby tombs. Pepper retrieves gems from inside a sphinx, then ventures inside the mummy's tomb to get a Constructopedia page. Pepper then drives a car to the desert oasis, to get another page from a large fish that swallowed it, before meeting up again with the Adventurers. The entire team then flies to the jungle, where they learn that Mr. Hates has taken several dinosaurs captive. Pepper rides a t-rex to Mr. Hates's camp and rescues the dinosaurs with the aid of a hot air balloon, and then defeats Mr. Hates to get a page from him. Pepper then says goodbye to the Adventurers and returns to LEGO Island... again.

Upon having headed back to Pepper's homeland, Papa and Mama Brickolini are kidnapped by the Brickster and a group of his Brickster-Bots. Pepper then collects the final pages of the Constructopedia on LEGO Island and obtains a special radio from the Radio Station, which now is the only way to stun the Brickster-Bots as they became immune to pizza.

Pepper then walks to the space port and, after centrifuge and parachute training, takes a space shuttle to Ogel Island to find and rescue Mama and Papa. Pepper's initial obstacle is an asteroid belt leading to Ogel Island; however, he manages to navigate it without much hassle. Since the Brickster stole the landing gear and deconstructed the landing platform on Ogel Island, Pepper has to parachute down. On the asteroid, he makes pizzas to send the citizens to sleep while getting Mama and Papa out of their situation. He then confronts the Brickster in his palace, locking him in a jail cell at the top of the tower.

Pepper (once more), Mama and Papa fly home in a Fish Ship, and land on LEGO Island, where the Infomaniac greets them. Pepper's girlfriend (whose name is unknown and wasn't involved in the incident the whole time) tackles him and kisses him, and the scene then fades to a dance party at the Pizzaria. Suddenly, five Brickster-Bots burst out of nearby crates. The music stops, but the Brickster-Bots start to dance, and the party resumes. The camera then slowly fades and moves away from the party through a group of LEGO Island residents, and the Brickster shows up from a manhole briefly (despite being punished already), concluding the game.

Unlike the first game, LEGO Island 2 only has Pepper as a playable character. Every other character on the island only gives help or serves as part of an objective.

A sports game was available on the official website:

The Brickster escapes from jail again and Pepper Roni must maneuver several courses on Adventurers’ Island to catch him.[1] It was released on April 17, 2001.[2]

LEGO Island 2 has a curious development history, starting as an unrelated project ("LEGO Fantasy"[3], possibly a working title) being developed by Krisalis Software (the developers of LEGO Chess and LEGOLAND), as a tie-in for a cancelled TV show with no relation to LEGO Island. A one minute demo of the TV show was found on an archive of the company that animated it, Vision-Scape. 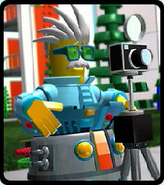 A still frame from the demo, from Vision-Scape's website

David Upchurch, the game's original producer from August 1998 to August 1999, says the following on his website:

He later provided more details in a conversation with a fan:[3]

Concept art and behind the scenes pictures from LEGO Adventures! Magazine

… LEGO Island<br />with Elements from:* Adventurers (Egypt, Amazon, and Dino Island)* Space Port* Knights' Kingdom* Town (Res-Q, Police)* Trains* Pirates (In the Diving sub-game and Islanders can be seen on Adventurer's Island)* Rock Raiders (Originally planned to have an island in the PC version, but was cut. There is still some left over content. The GBC version had a Rock Monster battle in the cave)ion had a Rock Monster battle in the cave) +
Title
LEGO Island 2: The Brickster's Revenge +
Date"Date" is a type and predefined property provided by Semantic MediaWiki to represent date values.
2001 +
Advertisement