The Game Boy Advance version is a mix of the PC/PlayStation and Game Boy Color versions of the game. Like the PC and PlayStation versions, there are many sub-games to play and vehicles to ride. However, the Toy feature is limited to plants only. There are also many elements from the Game Boy Color version, such as Trading Cards to find, side quests, and a heavy emphasis on items, which Pepper Roni stores in his backpack. The game is much more open and less linear, usually giving the player more than one goal at a time. Pepper's movement is limited to paths, similar to the original LEGO Island, making it impossible to see every area of LEGO Island in-game.

The game opens with the Infomaniac and Nick Brick on the TV news station, talking about the Brickster's recent escape and the theft and destruction of the Constructopedia. Later, the Infomaniac meets Pepper outside the location of his former house. The Infomaniac gives Pepper the Construcopedia page for his house, which Bill Ding uses to rebuild it. From there, the player is free to explore the island, complete minigames, and find items for people. Eventually the player is able to take a ferry to Castle Island after getting a ticket from Lucky, and go to Adventurer's Island by talking to Johnny Thunder at the Emergency Response Center. Once all the Constructopedia pages have been found and the island rebuilt, Pepper has to go to Ogel and battle the Brickster. After the Brickster has been defeated, the game ends with the Infomaniac giving a news report on the Brickster's capture.

Screenshot of a development tool

Early sprites for the Brickster-Bots

Early sprites for the Brickster 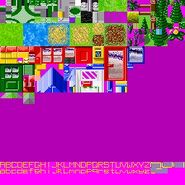 A tile map for the game

An early screenshot featuring Glen Funberg as he was in LEGO Island.