5883 Pteranodon Tower is a Dino set released in late 2011. It includes a watchtower on the water with a dock, tranquilizer refilling station, a speedboat, a net, and a small room with controls for the minifigure. It includes one minifigure, and a brown Pteranodon. The fish on the tower is to lure the Pteranodon. 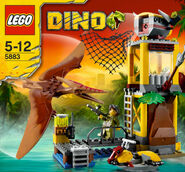 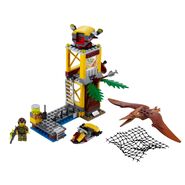 Retrieved from "https://brickipedia.fandom.com/wiki/5883_Pteranodon_Tower?oldid=1421558"
Community content is available under CC-BY-SA unless otherwise noted.