Brickipedia
Register
Don't have an account?
Sign In
Advertisement
in: Class 2 articles, Sets listed for ages 6 - 12, 2012 sets,
and 2 more
English

5885 Triceratops Trapper is a Dino set released in late 2011. It includes a huge truck with flick-fire tranquilizer missiles, tranquilizer guns, spikes, and a large cage in the back to put the dinosaur in. It also includes two minifigures and a Triceratops.

This set comprises of only one main vehicle, and a Triceratops. The vehicle is a fairly large 4WD with a dinosaur prison located in the back of the truck. In the front of the vehicle are spikes and the engine's grilles. Also, near the driver's seat, are two flick-fire missile launchers on each side of the vehicle front portion. Lining the exterior of the side portions of the truck are black coloured fence pieces. Gate parts which fold upward and downward are located in the back, which assists in moving the dinosaur in and out of the mini "prison" in the rear of the vehicle.

The Triceratops trapper is a vehicle whose sole purpose is capturing the Triceratops dinosaur. To capture it, the "heroes" can utilize their flick-fire missiles located on both sides of the front of the truck. Once the Triceratops has been tranquilized, they load the creature in the rear of the truck, and take it to the headquarters. 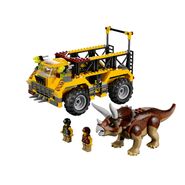 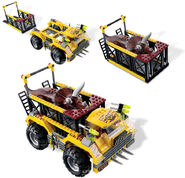 x12px 80,000 원 +
Released
2012 +
ShopDescription
Cage the Triceratops and keep the city … Cage the Triceratops and keep the city safe!</br></br>The mighty Triceratops is on the rampage and headed straight for the city! Fire the tranquilizer weapons, lure it into the cage and load it onto the truck before it reaches the city and causes mayhem! Includes 2 hero minifigures and a Triceratops dinosaur.</br></br>*Includes 2 hero minifigures and Triceratops dinosaur</br>*Features truck with closing cage, 2 flick missiles and tools</br>*Weapons include 2 tranquilizer guns</br>*Capture the Triceratops in the cage!</br>*Load the cage onto the truck!</br>*Measures 30” (76cm) wide and 22” (56cm) high</br>*Triceratops measures over 9” (23cm) tall</br>*Truck measures over 22” (58cm) long tall
Theme
Dino +
Title
Triceratops Trapper +
Txt1
Driver +  and Triceratops +
Txt2
Tracer Tops +
Type
Set +
USPrice
$49.99 +
Advertisement