5886 T-Rex Hunter is a Dino set that was released in early 2012. It includes a large helicopter to capture the T-Rex and a small 4-wheeled ATV with a trailer. The ATV has a crate of tools in the back, and the helicopter has flick-fire tranquilizer missiles, tranquilizer guns, an opening cockpit and a large winch with a grabber claw in the middle to pick up the T-Rex. 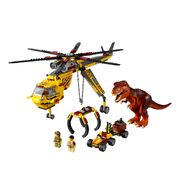 Retrieved from "https://brickipedia.fandom.com/wiki/5886_T-Rex_Hunter?oldid=1855044"
Community content is available under CC-BY-SA unless otherwise noted.