588 Police Headquarters is a Police set released in 1978.

The set consists of four main builds which include a Police car, motorcycle, helicopter and the station as the main build. It includes three Policemen and a civilian. 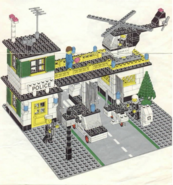