Brickipedia
Register
Don't have an account?
Sign In
Advertisement
in: Class 2 articles, Sets listed for ages 8 - 12, Creator,
and 4 more
English

5892 Sonic Boom is a Creator set released in 2010. Included are instructions and parts to build a large red-and-white jet and two other models: a dual-propeller plane and a speedboat.

The set includes 539 pieces, mainly in Red and White, which are used to build the set's main model, a large jet, as well as two secondary models, a dual-propeller airplane, and a speedboat.

The jet is the main model of the set, as well as the largest model, at over 15" long and 13" wide, and has movable tailplanes and wing flaps, and an opening cockpit canopy. The jet also has two Lightbricks in the engine assembly, which can be activated by pulling a lever on the jet's back.

This is the second model of the set, and also the second largest, although it's dimensions are not mentioned in the LEGO.com description. As it's name suggests, this model has two turnable propellers. This model incorporates the set's two lightbricks in the same style as the supersonic jet, using them as for afterburner effects in the engines. Unlike the supersonic jet, this model does not have movable flaps on the wings or movable tailplanes.

The speedboat is the third model of the set, as well as the smallest, although, like the dual-propeller plane, it's dimensions are not mentioned in the description. It has two engines with turnable propellers, as well as a movable steering wheel. This model uses the set's lightbricks as headlights. 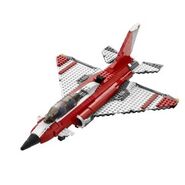 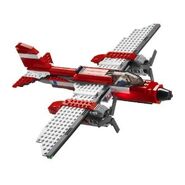 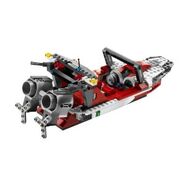 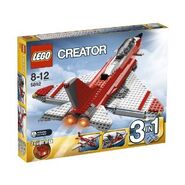 All the set's models