5905 Hidden Treasure is an Adventurers Jungle set released in 1999. This set comes with a small jungle temple that has a hinged top that, when opened, reveals a Golden Sun Disk. There is one minifigure included: Pippin Reed in her Jungle outfit. Also included are a snake and a spider.

Hidden Treasure is one of the smaller Jungle sets. It is composed of a small rock and Pippin Read. The Rock is as tall as a Minifigure (four studs). On the top is a large leaf concealing a transparent neon yellow jewel. Below it is a set of arches from which a snake emerges to attack treasure thieves. The whole part can be lifted to reveal a Sun Disk. 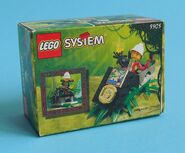 Retrieved from "https://brickipedia.fandom.com/wiki/5905_Hidden_Treasure?oldid=1968623"
Community content is available under CC-BY-SA unless otherwise noted.