Brickipedia
Register
Don't have an account?
Sign In
Advertisement
in: Class 4 articles, Sets listed for ages 7-12, 5000 sets,
and 3 more

5935 Island Hopper is a LEGO Adventurers set released in 2000. The Island Hopper is a simple aircraft. It includes a Pippin Reed minifigure and a Pteranodon, and comes with a shovel, camera, rifle, and backpack. It also appears in LEGO Racers 2 flying around Dino Island. 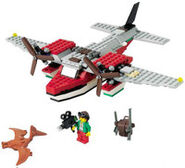 The Hopper in LEGO Racers 2