The Space Police Raptor is much like a hovering speeder. It is wedge-shaped and mainly white, with two sloped bricks on each side. Stickers of a black rectangle with the word POLICE inside are located on each side of the vehicle, along with stickers of grey ovals with a pattern like trailing smoke behind them. On each side, a flat 2x1 piece much like a grill is located. Protruding from the front of the Raptor are twin blasters in the form of transparent green cone pieces. Above these is a white flap acting as the hood. A sticker present on the hood depicts the Space Police III insignia; a red wedge shape with a star in the centre and a curved line in the lower right corner. The hood can be lifted up by way of the hinges it is connected to. The Raptor's handlebars are black and can move up, down and both sides. The officer stands behind the handlebars and can grip them with both hands.

The Minifigures and Accessories

The officer is dark grey with black hands and printing of light armour. The Space Police III insignia is located in the centre of his torso. The minifigure wears a black helmet with a visor of the same colour and has silver glasses over a grinning face. Squidman has a bright green body and torso with a red cape and a specially moulded grey headpiece with protruding red eyes, three teeth and a long, narrow red tongue.

The piece representing money is a flat green 2x1 brick with a white 100 in the centre and smaller black printings of the same number in each corner.

Squidman, a known intergalactic criminal, was on the run with stolen money. To track him down, the Space Police deployed an officer in a Raptor, a high speed hovercraft. 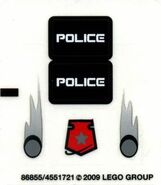 The sticker sheet for the set

The top of the Raptor

$9.99 +
Released
May 30, 2009 (US) / June 4, 2009 (UK) +
ShopDescription
Squidman is on the loose!
Atte … Squidman is on the loose!<br />Attention all Space Police units! The infamous Squidman has stolen a fortune in space-credits, and he’s on the run somewhere in the solar system. It’s up to you to track him down using the Space Police Raptor, catch the crook, and toss him back into galactic jail!* Squidman and Space Police Officer minifigures included!* Lift the hood or adjust the handlebars of the police vehicle!* Space Police Raptor measures 3½ inches (8.9cm) long!ce Raptor measures 3½ inches (8.9cm) long! +
Theme
Space +
Title
Squidman Escape +
Txt1
Squidman +
Txt2
Space Police III Officer +
Type
Set +
USPrice
$5.99 +