Brickipedia
Register
Don't have an account?
Sign In
Advertisement
in: Class 2 articles, Sets listed for ages 7–12, Dino Island,
and 3 more

5975 T-Rex Transport is an Adventurers set from the sub-theme Dino Island released in 2000. It contains 322 pieces including a boat, (a transport lorry for the T-Rex), three dinosaurs (a T-Rex, a Baby T-Rex, and a Triceratops), and five Minifigures: Lord Sam Sinister, Alexia Sinister, Johnny Thunder, Mike, and Dr. Kilroy.

The large boat is used to transport dinosaurs across Dino Island. At the back is a small place from which the boat is piloted by Mike. The boat is large enough to carry a Triceratops or a T-Rex, or a large amount of supplies. Its colour scheme is mostly light grey, and white, with some red and blue thrown in.

The car with a trailer is a small vehicle with a detachable trailer. The main purpose of the trailer is to transport a T-Rex, but it is also used to transport supplies and people. The car has a small windshield and a license plate. The colours of the car vary, but consist of some red, tan, and brown.

The other car, which is driven by Alexia Sinister, is slightly smaller than the other car. It is mostly blue and gray, and carries some supplies. It only fits one person. It has lots of tool holders and a box in the back.

When the Adventurers went to Dino Island, they had to confront Lord Sam Sinister and Alexia Sinister, who want to capture the dinosaurs for evil purposes. The Adventurers are aided by Mike. 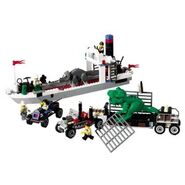 The car from the set in LEGO Racers 2

The transport in LEGO Racers 2