The Raid VPR is the smallest Space Police III set from the 2010 wave. It contains 69 pieces and two Minifigures; a Space Police Commando and Rench (equipped with a large Minifigure Space Gun made of two pieces).

The cockpit of the Raid VPR is small compared to most LEGO vehicles, only being able to fit one standard Minifigure inside. The cockpits interior is roughly covered around by 1x4 White panel pieces and an opening Dark-Blue Transparent round cockpit windscreen. Behind the cockpit, the Raid VPR sports a Blue and Red 1x1 slope pieces next to each other on top of the cockpit (representing the Blue and Red Police siren), a small white tail with a sticker of the Space Police III symbol and two small 6x3 wedge pieces sticking out.

Both sides bare 1x2 tiles, one being Transparent Blue on one side and the other being a Transparent Red. The small wings also bare a flick-fire missile on the end of their wings. The front of the Raid VPR also has two larger front wings commonly used as pieces on TECHNIC models, however, in this model they are used as wings with several stickers on each side of the Raid VPR. On the front of the cockpit it also has two Space gun pieces with Transparent Green studs attached.

The Raid VPR was an elite Space Police vehicle piloted by a Space Police Commando. It was used to capture Rench. 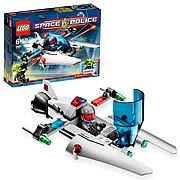 The Raid VPR with box

A prototype of the Raid VPR

The back of the prototype