The set consists of a large, armoured luxury space limo, plus three minifigures - the criminal kingpin Brick Daddy, his driver Jawson and a lone Space Police Commando with rocketpack. The Lunar Limo is the largest Black Hole Gang vehicle in the Space Police III theme and sports a solid black colour scheme highlighted in purple and gold. It features a launching missile on the front and an opening cabin roof, which allows Brick Daddy to escape on his miniship. The rear of the ship contains a compartment for the Space Police minifigure to hide in.

The complete set, minus the Space Police Commando

The Limo with canopy open 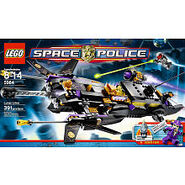