The Space Police Central is mainly white, with translucent blue windows. The main building and control tower rests on a large grey baseplate. The main floor of the main building consists of the garage used to house the prison pod transport truck included in the set. Inside the garage is a small tool rack, and the door consists of thin alternating black and yellow panels, with one white panel possessing a small handle at the very end. The door slides open sideways. In front of the garage is a small white, printed ramp leading over the bricks that the door slides on, and an unprinted slope using the same piece leads back down on the inside.

On the second floor is the control room. The room's main feature is the two large, curvaceous translucent blue windows that make up most of the room's exterior. At the edge of each window is a column of white bricks ascending along the windows' edges, and each column holds an upwards-extending antenna. In front of the large windows and on the inside of the room is a computer, which is comprised of three printed 2x2 slopes. On the right side of the room are two containers storing research equipment. The smaller, top-most one holds a so-called "Sniffer Frog", and the other contains "Evidence". There is also a a small clip for a metal detector on the "Evidence" box that holds a black metal detector. On the left side of the room is a weapon storage area. In front of the room, still on the second floor, is a small balcony that has clips for more equipment, as well as sirens and two freeze ray cannons.

The Break Room has wanted posters of Brick Daddy and Squidtron. 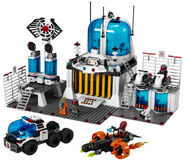 The Back of the box.

The side of the box. 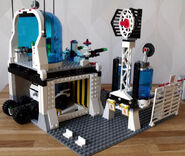 A side-on of the set.

Rear shots of the Minifigures.