Brickipedia
Register
Don't have an account?
Sign In
Advertisement
in: Class 4 articles, Sets listed for ages 8–12, 1999 sets,
and 4 more
English

5986 Amazon Ancient Ruins is an Adventurers Jungle set released in 1999.

This set contains 453 pieces to construct a large jungle temple, a motorcar, a boat, and eight minifigures. Johnny Thunder and the Adventurers crew travel to the heart of the South-American Jungle in search of treasure. This set comes with a variety of bright coloured bricks and rare pieces.

This set has two main parts: one part having a booby-trapped statue, and another part that has the main temple. Achu's throne has the platform for the sun disk to sit on. It also includes a throne for Achu on top of a huge doorway.

The Amazon Ancient Ruins started with a pyramid base built of limestone blocks.[1] While their exact purpose is unclear, Dr. Kilroy identified it (or a part of it) as a temple on his map. Johnny Thunder initially had an easy time retrieving the artefact from its tower, but the bridge was shaky and broke down when Thunder tried to cross it again (possibly through Achu’s influence).[2] Meanwhile Señor Palomar and Rudo Villano were trying to retrieve a ruby placed on one of the ancient platforms, but it triggered a trap that sent Palomar underground. In the end, the ruins remained largely intact, and Achu ascended to its top, holding the Sun Disc in his right hand.[3] 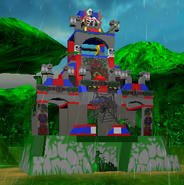 The Ruins as a temple in LEGO Racers 2