Brickipedia
Register
Don't have an account?
Sign In
Advertisement
in: Class 4 articles, Sets listed for ages 8–12, 5000 sets,
and 4 more

Dino Research Compound is a Dino Island set that was released in 2000.

This is the largest set in the Dino Island sub-theme. It is a three-story research building complete with six Minifigures - Johnny Thunder, Pippin Reed, Dr. Lightning, Mike, Mr. Cunningham, and Baron Von Barron. It also includes four dinosaurs - a T-rex, a Baby T-Rex, a Stegosaurus, and a Pteranodon. This set contains many dinosaur catching tools and vehicles, including a twin-engine aeroplane and a car. The compound is situated on a river.

The set at a different angle 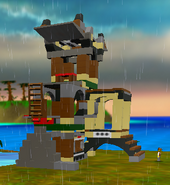 The Compound in LEGO Racers 2 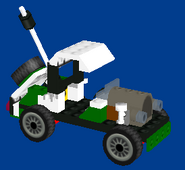 The set's car as it appears in LEGO Racers 2