Brickipedia
Register
Don't have an account?
Sign In
Advertisement
in: Class 3 articles, Sets listed for ages 5-12, City,
and 5 more
English

The set consists of two main parts: the tanker truck and the small fueling station.

The tanker truck is mainly white, red, and green. The cockpit of the truck features room to seat the minifigure, and on the roof of the cockpit are some translucent orange pieces acting as lights. In front of the seating area is a transparent windshield, and on the sides are some side mirrors. Below the windshield are some more translucent elements acting as headlights. On each side of the seating area is a white door, and behind each door is the Octan logo. Behind the entire seating area is the fuel tank, which is mainly white with stickers or printing giving it green and red decorations, with the Octan logo situated next to the word "Energy" in green. Behind the word "Energy" is a small decoration featuring three leaves on a branch. Below the tank is a coiled-up black and yellow hose.

The service station is also mainly white, red, and green. On the far left is a flat brick with a sticker that allows it to look like a computer screen, and on its right is a sloped brick with printing on it functioning as a keypad. A black hose with a yellow nozzle at the end extends from behind the service station. 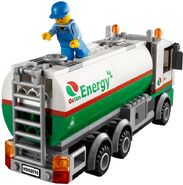 The Tanker Truck seen in The LEGO Movie