6011 Black Knight's Treasure is a Castle-themed set released in 1985. It is a horse drawn carriage commonly used in the medieval era. It contains 25 pieces. The set features a red-and-yellow two-wheeled cart carrying a light gray treasure chest, pulled by a black horse, and driven by a lone Black Falcons knight who is armed with a spear. There is a special piece located on the back to hold the saddle using the clip on its side. 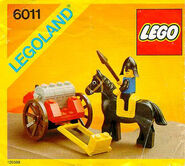 The instructions
Add a photo to this gallery