6012 Siege Cart is a LEGO Castle set released in 1986. The set contains 54 pieces to construct a black and brown siege cart ballista and two Crusader soldiers along with a few accessories.

The soldiers have lion crests on their torsos. On the front of the cart is a triangular yellow lion shield. The ammunition for the ballista consists of three brown spears. There is no actual mechanism to fire the weapon. 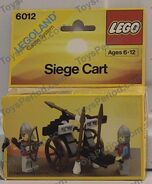