The set contains 54 pieces and 2 minifigures, which build a small police plane and small vault build. The police plane has two wheels on the bottom, and the bottom of the plane is made of blue bricks, topped by white bricks. The cockpit is 6x4x2 transparent light blue cockpit piece, and the nose is printed with the Sky Police logo, while the tail is printed with a police flag. The wings are blue with transparent blue 1x2 slabs on the tips, and the left wing has a small cannon under it made of a 1x2x3 stone gray motor piece with a 1x1 transparent yellow nose cone attached to it. The vault build has a 4x4 brick yellow base with a 1x4 bright yellow police slab on top. Across from the slab is a 2x2x2 stone gray roof tile at 65 degrees, and next to that is a 2x2 mailbox. On top of the mailbox is a 2x2 bright green slab, with a black steering wheel on top of that. There is a transparent red diamond inside the vault. 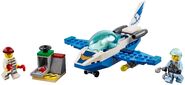 Retrieved from "https://brickipedia.fandom.com/wiki/60206_Sky_Police_Jet_Patrol?oldid=1976404"
Community content is available under CC-BY-SA unless otherwise noted.