Crusaders+Black Falcons
6021 Jousting Knights, named 6021 Sir Richard and the Black Knight in the United Kingdom,[1] is a Castle set released in 1984.

The set includes Sir Richard and the Black Knight, with horses, various jousting weapons, and shields. The flags are different colours, red and blue. It contains 41 pieces.

Sir Richard is sitting on a blue saddle, which is placed on the back of the white horse. A sword hangs down from the saddle, and the Crusader is holding a brown lance, topped with a red flag. The Black Knight is riding with a white saddle on the black horse. A sword also hangs from his saddle. The Black Knight also holds a brown lance, this time topped with a blue flag. The Black Knight has a triple blue feather on his helmet, while Sir Richard has a single red feather on his helmet. Aside from the two horsemen, there is a small stand made of a barrel, which holds two spare, flag-less lances, and two grey shields. The two grey shields are of different, older design than the knights' shields. 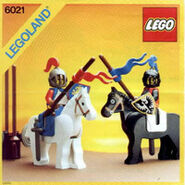