Brickipedia
Register
Don't have an account?
Sign In
Advertisement
in: Class 3 articles, Sets listed for ages 5+, City,
and 2 more
English

A service station, or filling station, is a facility that sells fuel and engine lubricants for motor vehicles. The most common fuels sold in the 2010s were gasoline (gasoline or gas in the United States and Canada, generally petrol elsewhere) and diesel fuel. Fuel dispensers are used to pump gasoline, diesel, compressed natural gas, CGH2, HCNG, LPG, liquid hydrogen, kerosene, alcohol fuel (like methanol, ethanol, butanol, propanol), biofuels (like straight vegetable oil, biodiesel), or other types of fuel into the tanks within vehicles and calculate the financial cost of the fuel transferred to the vehicle. Besides fuel dispensers, one other significant device which is also found in filling stations and can refuel certain (compressed-air) vehicles is an air compressor, although generally these are just used to inflate car tires (tyres). Also, many filling stations incorporate a convenience store, which like most other buildings generally have electricity sockets; hence, in some cases, plug-in electric vehicles can be recharged.

The convenience stores found in filling stations typically sell confections, cigarettes, lottery tickets, soft drinks, snacks and, in some cases, a small selection of grocery items, such as milk. Some also sell propane or butane and have added shops to their primary business. Conversely, some chain stores, such as supermarkets, discount stores, warehouse clubs, or traditional convenience stores, have provided filling stations on the premises. 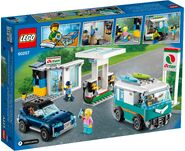