An air show, (or airshow, air fair, air tattoo) is a public event where aircraft are exhibited. They often include aerobatics demonstrations, without they are called "static air shows" with aircraft parked on the ground. Some airshows are held as a business venture or as a trade event where aircraft, avionics and other services are promoted to potential customers. Many air shows are held in support of local, national or military charities. Military air firms often organise air shows at military airfields as a public relations exercise to thank the local community, promote military careers and raise the profile of the military.

Before the Second World War, air shows were associated with long distance air races, often lasting many days and covering thousands of miles. While the Reno Air Races keep this tradition alive, most air shows today primarily feature a series of aerial demos of short duration. Most air shows feature warbirds, aerobatics, and demonstrations of modern military aircraft, and many air shows offer a variety of other aeronautical attractions as well, such as wing-walking, radio-controlled aircraft, water/slurry drops from firefighting aircraft, simulated helicopter rescues and sky diving. 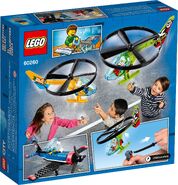 Blueprints
Add a photo to this gallery