Brickipedia
Register
Don't have an account?
Sign In
Advertisement
in: Class 2 articles, Sets listed for ages 4+, City,
and 5 more
English

An airport is an aerodrome with extended facilities, mostly for commercial air transport. Airports often have facilities to park and maintain aircraft, and a control tower. An airport consists of a landing area, which comprises an aerially accessible open space including at least one operationally active surface such as a runway for a plane to take off and to land or a helipad, and often includes adjacent utility buildings such as control towers, hangars and terminals. Larger airports may have airport aprons, taxiway bridges, air traffic control centres, passenger facilities such as restaurants and lounges, and emergency services. In some countries, the US in particular, airports also typically have one or more fixed-base operators, serving general aviation.

An airport solely serving helicopters is called a heliport. An airport for use by seaplanes and amphibious aircraft is called a seaplane base. Such a base typically includes a stretch of open water for takeoffs and landings, and seaplane docks for tying-up. 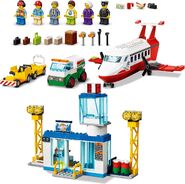