Brickipedia
Register
Don't have an account?
Sign In
Advertisement
in: Class 2 articles, Sets listed for ages 6+, City,
and 4 more
English

A passenger airplane, or airliner is a type of aircraft for transporting passengers and air cargo. Such aircraft are most often operated by airlines. Although the definition of an airliner can vary from country to country, an airliner is typically defined as an airplane intended for carrying multiple passengers or cargo in commercial service. The largest of them are wide-body jets which are also called twin-aisle because they generally have two separate aisles running from the front to the back of the passenger cabin. These are usually used for long-haul flights between airline hubs and major cities. A smaller, more common class of airliners is the narrow-body or single-aisle. These are generally used for short to medium-distance flights with fewer passengers than their wide-body counterparts. 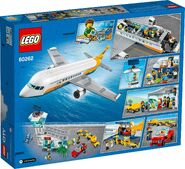 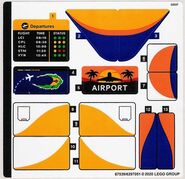