Brickipedia
Register
Don't have an account?
Sign In
Advertisement
in: Class 2 articles, Sets listed for ages 4+, City,
and 3 more
English

60263 Ocean Mini-Submarine is a City Deep Sea Explorers set that was released on September 1, 2020.

A submersible is a small watercraft designed to operate underwater. The term submersible is often used to differentiate from other underwater vessels known as submarines, in that a submarine is a fully autonomous craft, capable of renewing its own power and breathing air, whereas a submersible is usually supported by a surface vessel, platform, shore team or sometimes a larger submarine. In common usage by the general public, however, the word submarine may be used to describe a craft that is by the technical definition actually a submersible. There are many types of submersibles, including both crewed and uncrewed craft, otherwise known as remotely operated vehicles or ROVs. Submersibles have many uses worldwide, such as oceanography, underwater archaeology, ocean exploration, adventure, equipment maintenance and recovery, and underwater videography. 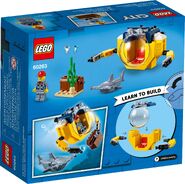