6037 Witch's Windship is a Fright Knights set released in 1997. The set contains Willa the Witch in a fantasy aircraft that consists of a gondola pulled by a dragon.

On board the windship is a crystal ball. On the front of the gondola are two halberds mounted on hingeplates that allow them to be put together or swung apart. 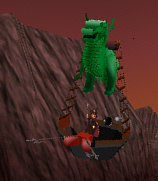 The windship in LEGO Racers

Retrieved from "https://brickipedia.fandom.com/wiki/6037_Witch%27s_Windship?oldid=1955624"
Community content is available under CC-BY-SA unless otherwise noted.