Brickipedia
Register
Don't have an account?
Sign In
Advertisement
in: Class 4 articles, Sets listed for ages 6–12, 1988 sets,
and 2 more

6039 Twin Arm Launcher, also known as Double Catapult in the UK,[1] is a Castle set designed by Daniel August Krentz[2] for the Crusaders faction and released in 1988. The set contains 73 pieces and instructions to build a double-armed catapult, a horse and two Crusader soldiers.

A lightweight, double-armed black catapult was the subject of 1987's 6039 Twin Arm Launcher set. The hinged, "finger-powered" catapult arms on the four-wheeled rig hurled 1×1 yellow bricks as ammunition, and was manned by two Crusaders knights, one on horseback. 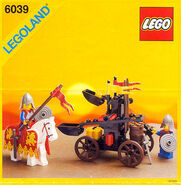 The set shown in a catalogue