Brickipedia
Register
Don't have an account?
Sign In
Advertisement
in: Class 2 articles, Sets listed for ages 7–12, 1984 sets,
and 3 more

6040 Blacksmith Shop, also known as Blacksmith’s Forge in the UK,[1] is a Castle set designed by Daniel August Krentz[2] and released in 1984. The set includes a smithy with a blacksmith, a Crusaders guard, and a horse.

This was the earliest Castle set to feature a civilian minifigure. This set depicts a bare-chested blacksmith, who wore an exclusive brown cape piece as an apron. His shop was part of the early modular Castle wall piece collection, and could connect to other walls by way of technic pins, to form a larger custom Castle creation.

The Blacksmith Shop featured a red forge and chimney, and a blue anvil. A black horse is included, as well as two wheels and several parts to make a small cart. The shop is guarded by one Crusaders guard, who had a Crossed Axes-crest on his torso. The instruction sheet for this set included an alternate instruction, to re-build a small tower and horse-drawn cart from the pieces. 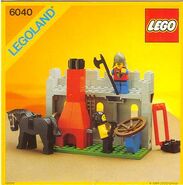