Brickipedia
Register
Don't have an account?
Sign In
Advertisement
in: Class 4 articles, Sets listed for ages 7 - 12, 6000 sets,
and 3 more

6049 Viking Voyager is a Castle set of the Crusaders faction, released in 1987. The set contains a large rowing boat, and five Crusader soldiers.

The Viking Voyager ship of bears very little resemblance to sets released later on from the much larger Vikings range of 2005-06. The red and grey brightly coloured vessel carries five minifgures; three rowing their oar spears at the deck, and one at the front and at the back. The minifigures aboard are two Crusaders knights (on the back and front), and three soldiers of the Crossed Axes crest who row at the deck. The ship transports a treasure chest containing a yellow goblet and two studs. Since the common oars were not yet introduced until the advent of the Pirates theme in 1989, this set used spears instead. 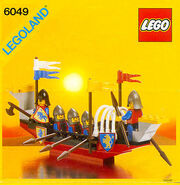