6066 Camouflaged Outpost, also known as Robin Hood’s Secret Cave in the UK,[1] is a Castle set designed by Niels Milan Pedersen[2] and released in 1987 under the Forestmen subtheme. It contains a woodland hideout, a horse, and six forestmen. With 211 pieces, this is the second biggest set of the Forestmen series.

The hideout consists of a tree and a large rock that are both hollow and built on separate baseplates interconnected with hingebricks to fold the structure open. The hollow rock has a large overgrown cover plate at the front that can be folded up for easier access to the interior. Another entrance is covered by a black rock on its side, that is mounted on a Technic pin, allowing to swivel it back and forth, to either open or close the passage. On the first floor, in front of the tree, is an observation platform with crenelations. The interior of the hideout is empty. 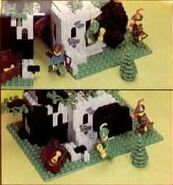 Box view
Add a photo to this gallery