6074 Black Falcon's Fortress is a Castle set designed by Daniel August Krentz[2] and released in 1986. It contains a small castle of the Black Falcons, two guards, two archers and two knights with horses. This was the second castle of this faction, succeeding the 6073 Knight's Castle from 1984.

In Canada and Australia, this was known as 6074 Eagle Crest Castle.[3] In the UK, it was Castle Draco and the Black Knight.[1]

The Black Falcon's Fortress has a rectangular layout featuring a gate with a drawbridge at the front, flanked by two semi-octagonal towers, and a residence building on the rear wall, making it the first LEGO castle ever that contained a distinguished living area. The residence or chapel featured a half-timbered wall panel and a small integrated tower with hip roof and a small balcony.

As its predecessor, the Knight's Castle, the fortress was built on green plate-pieces rather than on flat baseplates. It also utilized hinge-bricks that allowed to open the castle. There are no stairs nor a ladder to connect the different levels. The drawbridge is manually raised or lowered as there is no winch unlike the earlier Knight's Castle.

The rear side of the set box shows off an alternate build of the model. It is smaller, with different features. Similarly to the main build, it contains a living quarters, indicated by the Tudor-style wall panel. On the other side is a small overhang providing shade to resting knights. There is no drawbridge, but the front tower is taller with multiple levels.

The set comes with six minifigures. Each minifigure's job is identified by it's helmet. There are two archers, identified by their helmets with the chin-guard, Part 3896. Two of the Black Falcons are spearmen, whose helmets are Part 3844. Lastly, there are two knights, that are both different in horse colour, saddle colour, plume colour, helmet colour, and torso colour, but their helmets are both Part x167. There is a spare weapon which is a battle axe (perhaps a bardiche) mounted just inside the gate. 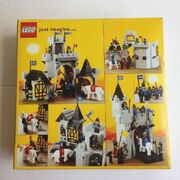