6075 Wolfpack Tower is a Castle set of the Wolfpack faction that was released in 1992. The set contains a tower with a bridge entrance, three Wolfpack bandits and a ghost.

The Wolfpack tower is the main fortress of the wolfpack renegades. It is built on a large water plate. The bottom floor is a chest on the water and a bridge with supports. The bridge leads into a large cavern/castle area. A ladder leads up to the second floor, with battlements and more. There is a ghost in the wall, which can be hidden using the ladder. On top of the the Wolfpack banner, a spear, a torch, and a bird of prey (gray parrot). The set is mostly black and gray. It contains three Wolfpack renegades. Both sides of the bridge can be raised or lowered, and a cliff wall part can be slid out.

Alternative models on the instruction booklet 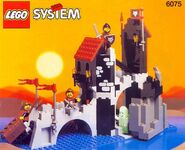 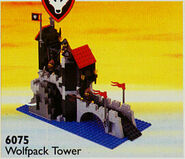 Retrieved from "https://brickipedia.fandom.com/wiki/6075_Wolfpack_Tower?oldid=1983124"
Community content is available under CC-BY-SA unless otherwise noted.