6078 Royal Drawbridge is a Royal Knights set released in 1995. The set contains a fortified bridge, a small raft, three Royal Knights guards, a Dragon Masters knight on a horse and a skeleton. 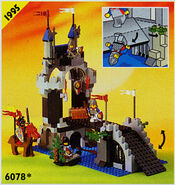 From catalog
Add a photo to this gallery

Retrieved from "https://brickipedia.fandom.com/wiki/6078_Royal_Drawbridge?oldid=1985049"
Community content is available under CC-BY-SA unless otherwise noted.