Brickipedia
Register
Don't have an account?
Sign In
Advertisement
in: Class 4 articles, Sets listed for ages 8-12, 6000 sets,
and 3 more
English 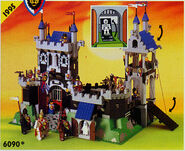 The back box showing alternative builds

The castle as seen in LEGO Fun to Build 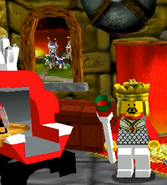 The castle's cameo in Lego Chess as seen through the window.

$95.00 +
Released
1995 +
ShopDescription
"Adventure and mystery await you within th … "Adventure and mystery await you within the many secret rooms and hidden passages of the royal castle. When danger threatens -- quick -- close the drawbridge, and let the brave knights protect the King and his treasure. If all else fails, there's a skeleton and a glow-in-the-dark ghost to scare intruders away!<br />Ages 8-12. 243 pieces."ruders away!
Ages 8-12. 243 pieces." +
Theme
Castle +
Title
Royal Knight's Castle +
Type
Set +
USPrice
$95.00 +
Advertisement