6160 Sea Scorpion is an Aquazone set released in 1998 as part of the Stingrays subtheme. It is the second largest Stingrays set and contains 292 parts.

The Sea Scorpion, the second largest Stingrays set and vehicle, is a medium/large set. It is made up of 3 parts: The main body and an arm, and its head. The main body is the largest section of the vehicle. It has an extra cockpit in the back with a control panel; this could be used to control the tail of to pilot the main body if it splits apart from the rest of the Sea Scorpion. It has two propellers, each one black with a transparent green part. It has two headlights. Attached to its left side is a large pincer. Both sides of the pincer open and close, and it stores two silver knives. The cockpit, which detaches from the main body, is small, similar to the smallest Hydronauts set. It has two silver harpoons on the top part of it. It attaches to a propeller. The other arm of the Scorpion is piloted by a Stingray. It has two arms and two propellers, and carries two silver harpoons. 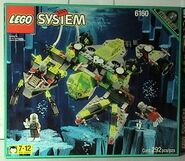 Retrieved from "https://brickipedia.fandom.com/wiki/6160_Sea_Scorpion?oldid=1968966"
Community content is available under CC-BY-SA unless otherwise noted.