6195 Neptune Lab, also known as Aqua Dome 7 is an Aquazone set released in 1995. It contains an underwater base of the Aquanauts, an exploration submarine and four minifigures. This is also the biggest Aquanauts set and also the only base of this faction.

The Aqua Dome 7 is built upon two raised Baseplates and consists of a large main complex, a separate control tower, a docking pad for the submarine and a small refueling station. The main section contains a spacious room with large windows at the rear and can be accessed through two smaller hatches and the large transparent doors at the front. The hatches on the side are each relatively hidden from view by rock formations. The more visible one has a keypad (which the Minifigures would punch in to unlock the door). Both of them have propellers on them which can blast intruders with water. On the roof is a crane (the only underwater one released) with a control station next to it. It has a clamshell attachment at the end, and this is the only set in which is is Transparent Blue. It is controlled with a Control Panel above the conveyor belt, and right next to it is a weapons rack and a pair of Diving Flippers. The crane can be used to scoop out crystals from the cargo bay of the sub to drop them onto a conveyor belt which is adjacent to the main complex. On the left of the conveyor belt is an antenna, and there are arrows pointing in both directions. It also uses Transparent Blue parts which allow viewing inside of the conveyor belt. From there the crystal can be moved to either a magnetic storage box or into the main room where the Aquanauts can examine them on a small platform. The platform has a smooth surface, so that the crystals slide on it easily. It can be angled downwards, allowing them to slide down. From there they slide into a small pit. To retrieve them, the "cage part" and the part below it can be lifted, allowing the crystals to slide out.

On a rock in front of the base lies a refueling station with a hose and a magnetic storage box. The top part opens, allowing the magnetic storage box to be removed. It has a propeller on top of it, which could be used to propel aquanauts up quickly or two blast water at an invading vehicle. A crystal is meant to be placed in the storage container. It is placed directly in front of the complex, in the dead centre of the two Baseplates. On either side of it are the "underwater road" shaped parts of the Baseplate, which perfectly fit a small Aquasharks Set or one of the smaller Aquanauts sets.

On the left side of the base is a turret/control tower. It has a large Transparent Blue top and the bottom is almost entirely Yellow. The top opens, allowing ample room for an Aquanaut to swim in or out, or even a Shark or Octopus. Inside the tower is a control panel and a weapons rack. There is also a large amount of room for Magnetic Storage Containers to be placed. The turret is not connected to the main complex. Right next to it is a large Red and Green bush.

The submarine has a cockpit with a cargo bay behind it and is equipped with two robot arms, one with a claw, the other one with a magnet. The cockpit has just enough room for one Minifigure to stand. It opens with a hinge, allowing the top part to open. It has a small slot behind the pilot, allowing more Magnetic Storage containers to be placed inside. On the top is an antennae, which can be angled, along with two lights, and flaps. The cargo bay is covered by four hinged panels and is actually quite small, so that Minifigures transported inside have to lie there horizontally. It also can be used to store Magnetic Storage Containers and Crystals. Opening the cargo bay also allows the section on which the propeller is to be opened, showing a small storage space. It is an ideal place to store up to 10 small Daggers or Harpoons. Like many other Aquazone vehicles, the submersible has a compass on it. It is Yellow and Black, with some Transparent Blue and Orange. It also has detachable Harpoons on the side which carry Diving Flippers. On the bottom are a pair of pontoon-shaped parts, which could be rockets/lasers or part of the propulsion system.

The set also includes two magnetic storage boxes, three crystals and an octopus. The Minifigures are all equipped with typical Aquanaut diving gear. One is the Aquanaut commander, who has a Blue visor, while the other 3 have Black visors. There are many places on the set on which Diving Flippers are placed, and many other places to place Silver Knives and Harpoons. The Octopus is a typical Black octopus.

The Neptune Discovery Lab is the base of the Aquanauts in their fight against the evil Aquasharks. Along with it is their second largest vehicle. 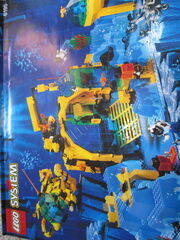 The Front Page of the Instructions

The doors are open

The inside of the submarine, revealing the compartments inside

One of the two side doors

The other side door

The back of the Instructions

The set, viewed from the back
Add a photo to this gallery