Nathan Evo is coloured yellow and dark silver, with orange eyes and a red plasma sphere. His left arm is shorter than his right, and on his left shoulder armour, a black clip shows up, the place to put the handcuffs. His right arm is a weapon, with a huge amount of armour and a plasma gun, and it is called a Tank Arm. His helmet is a little like that of 2.0, but in one piece and with more of his head guarded. It is slightly reminiscent of a construction builder’s helmet. Evo’s shoulders are shorter than others, and his body armour is yellow with silver metal markings to each side of his white Hero Core. He has yellow thigh armour and dark silver lower leg armour and feet that could be indicative of ‘boots.’

In “Ordeal of Fire”, Evo is calm and collected, and he drops into a meditative state between battles. He was one of the first Heroes built with the 2.0 upgrade, and he serves as a heavy duty fighter. In Breakout, however, he is more like a rookie slightly unsure of himself, as he asks Furno for help several times when looking for Toxic Reapa. At the end of the first stage of Breakout, he fights Black Phantom’s Arachnix Drones along with Surge, Stormer, and Furno, while Rocka fights Black Phantom. 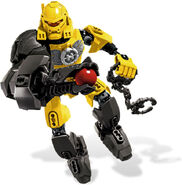 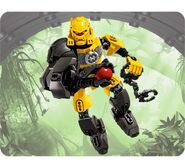 Retrieved from "https://brickipedia.fandom.com/wiki/6200_Evo?oldid=1986916"
Community content is available under CC-BY-SA unless otherwise noted.