Toxic Reapa wears black and transparent green armour, the two main colours in the set. His feet each have two spikes, and are the same pieces as those in the BIONICLE Zesk set. He wears no armour on his lower legs, which are black, and his thighs, lime green in colour, sport small transparent armour plates. His body is one of the wide-shouldered variety, and like villains in the first Hero Factory wave, Rise of the Rookies, the stub with the ball on top for the neck is left without anything connecting on to it. He uses a piece like the two main body pieces of Thornraxx, with his neck and two armour pieces connected on to it. Toxic’s arms are much thicker than his legs, due to the excessive amount of armour, which is composed of large shoulder armour like that of Evo, but in a different colour, an armour piece shaped in a different manner to all the other armour on his forearms, and a transparent armour piece for his "hands." Connected to the two holes in the "hands" are a transparent green large flame piece, and a transparent cord with a green inner. The other sides of the cords connect to dual waste tanks on his back. Toxic’s helmet is lime green, and his head is not one of the Glatorian heads, but a transparent orange BIONICLE Toa hand, though redesigned. His mouth is open, and he has large teeth of several sizes, as well as two gadget-things next to his jaw. He has a nose, which is not all that rare for Hero Factory helmets.

Toxic Reapa was a native of the planet Z’chaya, and equipped himself with a toxic waste tank that melts and contaminates anything it touches. However, he was captured, the Heroes breaking up his crime spree, and was imprisoned in the villain containment facility at Hero Factory, but then escaped with Voltix’s help. He traveled back to Z’chaya, intending to mutate larvae there and turn them into evil insects. He was caught and cuffed by Nathan Evo there, putting an end to his plans. 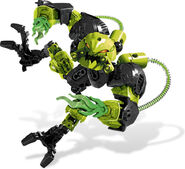 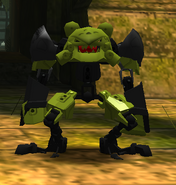