Rocka wields a golden crossbow with a transparent green lower gun piece, a silver sphere, and two ‘dagger’ pieces as the ‘arms’ of the crossbow. An ammo chain with several silver spears stretches from shoulder to sphere launcher, and on his other arm, Rocka sports a green hex shield similar to Breez’s. His armour colours are dark silver and gold, and his head is transparent neon green. The helmet he wears is gold with a special “heat scope” lens over one eye, much resembling Kopaka from the BIONICLE theme. He is equipped with an energy shield, crossbow with ammo belt, and a pair of hero cuffs. He is more expensive and larger than Stringer, Nex, Surge, and Evo.

Rocka first appeared in a 2.0 form that was only shown in a comic. During the transpiring events, he was upgraded to 3.0, with a lion helmet and new weapons. He turned into an XL Hero when facing the evil Witch Doctor on Quatros, where the comic was set. Later, in the Breakout series, Rocka guarded the Hero Factory informally while the other Heroes brought in the escaped villains, and he single-handedly, without weapons, bested Black Phantom.

The newest rookie from Hero Factory’s extensive production facility is Rocka. Engineered with upgraded parts, Rocka includes the very latest technology available. He was modeled after another very successful rookie, Furno, but has a distinctly different outlook from the older rookie.
Like younger Furno, Rocka is impulsive and sure of himself. His first instinct is to dive into a problem immediately, whether or not he’s ready for the challenge. His intelligence and abilities learned in hundreds of training sphere missions keep him out of trouble most of the time, but every once in a while he gets in over his head. Nevertheless, team leader Stormer has high hopes for this particular rookie Hero. 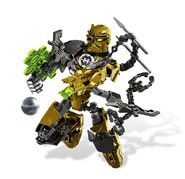 Retrieved from "https://brickipedia.fandom.com/wiki/6202_Rocka?oldid=1945521"
Community content is available under CC-BY-SA unless otherwise noted.