“What are you doing? Recharging me in hopes of earning my mercy? Ha ha!”
―Black Phantom to Rocka, about to be overcharged

6203 Black Phantom is a 124-piece set LEGO Hero Factory villain released in January 2012. It is the largest set of Breakout in the first wave, and contains a black and maroon villain, named Black Phantom, as well as a small spider-like creature called an Arachnix Drone.

Black Phantom is the largest of the early wave of Breakout sets. He is very similar to Fire Lord and Rocka XL as far as the “skeleton” is built. A piece like his mace is also featured in 4528 Green Lantern and other Hero Factory sets; his sword is used in 4526 Batman, 6227 Breez and 31313 Mindstorms EV3; and his chest plate is used in various sets throughout the Super Heroes line, along with 6222 Core Hunter. This set also features new pieces that were introduced in the Hero Factory line of 2012 which include the rounded shoulder armour, the arachnix drone head, and his helmet. As well as this, the meteor ball launcher is now remodeled so that only one axle can hook to it. His Glatorian head piece is recoloured into a new dark lime translucent piece. His helmet, which is also new to the line, is black with a jaw and a spine on the top. His helmet has two holes on both sides, so you can hook on different pieces. In this case, two Quaza spikes (introduced in Savage Planet) protrude from his helmet. They have no corrupted quaza in them, although Black Phantom himself apparently has an anti-quaza core of some sort. On his back, there are two small blades. These weapons feature three “skeleton” pieces, the dagger pieces introduced in 2.0, a small translucent lime shell, and a piece with four round ends with a partly translucent tube coming down the back. He carries a spider drone, which can clone itself to form millions of drones.

After the mastermind Von Nebula, with the help of Voltix creates the black hole allowing the villains to escape, Black Phantom, following Von Nebula’s plan (to steal the Hero Factory blueprints and destroy Hero Factory), sneaks into the factory.

The mastermind of Hero Factory’s unprecedented breakout, Black Phantom is smart as well as powerful. He stands head and shoulders above his friends and foes alike, and his razor sabre staff is swift to deal out injustice. To make matters worse, his Arachnix drone can instantly clone itself and make life miserable for anyone who gets too close!
He’s hidden himself deep inside Hero Factory, and only Rocka has a chance of tracking him down and stopping him. Not an easy job, when Black Phantom has booby-trapped his path...

A close-up of Black Phantom

Being overcharged by Rocka 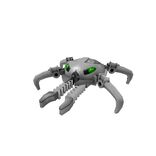 The Arachnix Drone as an item in ROBLOX.

$19.99 +
Released
2012 +
ShopDescription
Take control of the Hero Factory with B … Take control of the Hero Factory with BLACK PHANTOM!</br></br>Red alert! BLACK PHANTOM has been spotted inside the Hero Factory! He must be stopped at all costs, but be warned. He’s armed with an arachnix drone, saber strikers, staff with razor saber and mace. Watch out! He knows just how to use them. We know you won’t fail us!</br></br>* Features arachnix drone with ball shooter, saber strikers, staff with razor saber and mace!</br>* Highly flexible and poseable elements!</br>* Includes unique code worth 500 game points for LEGO® Hero Factory BREAKOUT game!</br>* Battle with hero 6202 ROCKA!</br>* Combine with 6202 ROCKA for an even bigger model!</br>* Stands over 11” (30cm) tall!gger model!
Theme
Hero Factory +
Title
Black Phantom +
Type
Set +
USPrice
$19.99 +
Advertisement