The set 6212 X-Wing Fighter was released in 2006 as part of the Classic Star Wars line. Included are Luke Skywalker, Wedge Antilles, Han Solo, Princess Leia, R2-D2, and Chewbacca minifigures. It is one of the only 2 sets to include Wedge Antilles. The X-Wing can be customized as Luke's Red 5 or Wedge's Red 2 X-Wing.

A more stylized image of the X-Wing. 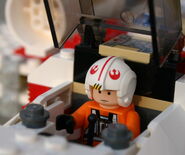